Silent movies have always inspired me with their compelling visual presence and strong graphics. "The Cabinet of Dr. Caligari" was an epiphany during my German Expressionist period back in college, right about the same time I discovered Egon Schiele. Now it's hard to imagine "discovering" Egon Schiele, that darling of Tumblr and Pinterest boards.

So every time I've DVRed a silent movie, I've felt somehow virtuous about using arcane knowledge acquired in college. I also confess to feeling somewhat smug about having a secret source of inspiration--it must be secret since I don't see lots of silent film stills being bandied about on the interwebs. Yet. But have you ever noticed that as soon as an idea penetrates your consciousness, everyone else simultaneously gets it too? It's that pesky universal consciousness again.

When I saw this article about 75% of early silent films being lost, I had just watched "Battleship Potemkin". I knew enough to look out for the staircase/baby carriage sequence, but found another hidden gem.

Remember, you saw it here first!

Posted by deborah from collagewhirl at 5:58 PM 2 comments: Links to this post

I know I've been very, very silent but I'm planning a post soon. In the meantime, thanks to those who inquired-- everything is fine although I must admit to losing focus, just a little, concerning this blog.

Thanks to anyone still reading and following.

I've been working on another project which I may talk about here. If I start a new blog no worries--I won't move away without leaving you the new address.

If you want to know what I'm up to, I can be found on Pinterest most days!
Posted by deborah from collagewhirl at 6:43 PM 2 comments: Links to this post


Circles have spoken and are still speaking to me right now as I try to revive my drawing practice. 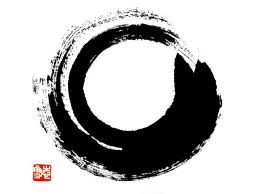 In Zen Buddhist painting, ensō symbolizes a moment when the mind is free to simply let the body/spirit create. The brushed ink of the circle is usually done on silk or rice paper in one movement (Bankei, however, occasionally used two strokes) and there is no possibility of modification: it shows the expressive movement of the spirit at that time. Zen Buddhists "believe that the character of the artist is fully exposed in how she or he draws an ensō. Only a person who is mentally and spiritually complete can draw a true ensō. Some artists will practice drawing an ensō daily, as a kind of spiritual practice."[1] from wikipedia 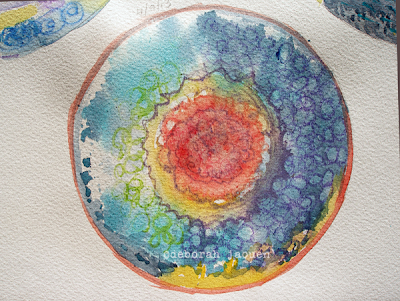 The circle has been serving as a template for the daily watercolors I've been doing for the past few weeks. It cuts through any resistance that may arise as I decide what to draw or paint. It just is, so I don't hesitate and dive right in. It's a good exercise in restraint to let just enough white paper peek through in certain places.


I'm respecting watercolor as the discipline it is. Anyone who has tried it knows you can't go back and add your lights if you decide you need to later on.


Daily drawing challenges have never been my thing so it feels right, finally, to be painting/ drawing again on a daily basis. I think it was because of the circle.

Posted by deborah from collagewhirl at 6:42 PM 6 comments: Links to this post

where I discovered this

What helps me stay on the creative track...

1- Exercise
A lot of my best ideas come in the last mile of a run. Endorphins put their spin on my thoughts, and even if they sometimes don't sound as exciting to me once the euphoria has worn off, I'm always thankful that I wrote them down while they were fresh.

2- Respecting the mind/body connection
Another sure fire method to stoke the creative fire is to practice meditation or yoga. The key to this is to be consistent, people!

3- Hanging out in the studio
This is as calming as meditation. It's productive too, because you often end up organizing and cleaning, which in turn frees you up for the next big project.

4- Travel, even if it's just to the closest big city or new neighborhood
New sights, sounds and smells, meeting new people, eating different food and seeing everyone else's creativity can jumpstart you out of your creative rut.

5- Creating and reinforcing new habits to best serve my current needs
I was having a hard time carving out a full hour in the mornings for writing and decided to write just a few minutes, with no pressure to reach a number goal, every morning before work. When I saw this 250 word challenge, I realized that I had been consistently hitting 250 and that it's a reasonable goal for me. Setting the bar low takes the pressure off, and I find myself wanting to write more.

What tricks have you found over time to help you in your creative practice?

Posted by deborah from collagewhirl at 8:08 PM 5 comments: Links to this post 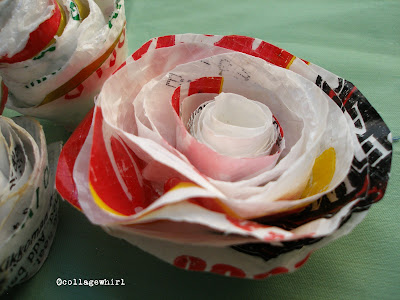 Wintertime makes me want to make new things I've never made. Like these flowers. 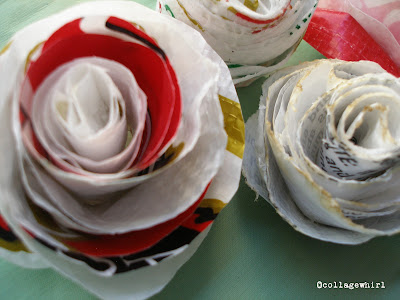 Small, fun, and fast using materials hidden away in a far corner of my studio.
Instant gratification. 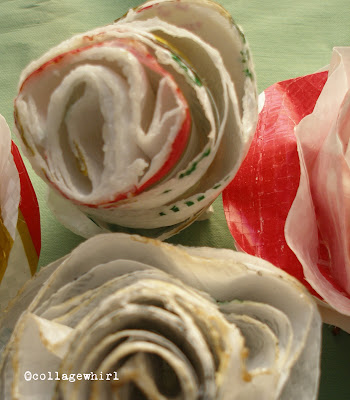 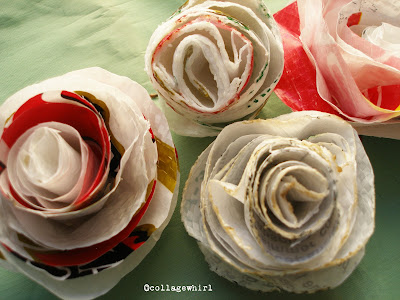 What has the weather where you live inspired you to make?

Posted by deborah from collagewhirl at 8:57 PM 6 comments: Links to this post

“Don't judge each day by the harvest you reap but by the seeds that you plant.”
― Robert Louis Stevenson

I have decided to live one of my dreams and finally create a real cutting garden for spring flowers. This local farm tells how they do it, but my little plants are quite a bit younger than theirs. I was hoping they wouldn't come up at all until spring. But our weather got really warm and the poor babies thought it was time to sprout. They're so cute and green and we're getting ready to put them to bed for overwintering tomorrow. Spring pics to come.

On a less literal level, what artsy seeds have you planted lately? Or maybe you're prepping the soil for a fertile future?
Posted by deborah from collagewhirl at 7:35 PM 1 comment: Links to this post

Happy Solstice in a Sacred Place

"This is an absolute necessity for anybody today. You must have a room, or a certain hour or so a day, where you don’t know what was in the newspapers that morning, you don’t know who your friends are, you don’t know what you owe anybody, you don’t know what anybody owes to you. This is a place where you can simply experience and bring forth what you are and what you might be, This is the place of creative incubation. At first you may find that nothing happens there. But if you have a sacred place and use it, something eventually will happen."
Joseph Campbell, in a 1985 interview with Bill Moyers

Hope you have a wonderful solstice! It's a great day to get outside and enjoy nature, the ultimate sacred place.
Posted by deborah from collagewhirl at 9:00 AM 3 comments: Links to this post

deborah from collagewhirl
So glad you stopped by--I'm a mixed media artist with lots of interests (art of course, gardening, nature, healthy food, being outside, travel, books, pop culture, writing, French culture) and this blog is one place I combine it all. So you never know what the next post will be about! Comments and followers are welcome.

Blog name, images, artwork and writing by Deborah Jaouen are copyrighted, so please get my permission to use them. Thanks!

Please contact me if you are interested in purchasing anything you see here. Please check my Etsy shop too.

Blog Only When Inspired

Promote Your Page Too